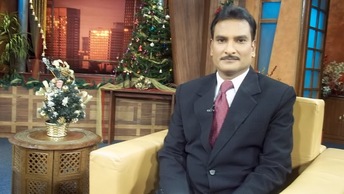 Edward Williams Kuntam was born and brought up in Andhra Pradesh where his parents Satyadas and Rajamma were good Christian lay persons in the Church of South India and Indian Pentecostal Church, Eluru. He has good memories of studying in CSI English Medium School, St. Xavier’s High School and Sir. C R Reddy College all at Eluru. After his completing BA in Economics and Post Graduate Diploma in Business Management and Administration with advertisement as specialization, Edward worked as marketing manager for a cable-manufacturing unit, for three years. He had a great desire to advertise his master and savior, Jesus Christ, to the college and university students and joined Union of Evangelical Students of India as student counselor in 1990.

He ministered to students in most of the universities and colleges for ten years. He then was the State Secretary of Andhra Pradesh until 2006. As the State Secretary he travelled across the state and also in other parts of India and preached or took seminars in prestigious institutes like IIT Bombay, IIT Kharagpur, IIT Gundy, IISC Bangalore, JNU Delhi, Central University Pondicherry, JIPMER Pondicherry and CMC Vellore.

As an RZIM trained apologist he taught in their regional seminars. He taught spiritual leadership in Haggai regional seminars. He has been the host of Nireekshana since 2000. Nireekshana is a weekly television show sponsored by CBN India and is aired on TV9 every Sunday evening at 5.30. Over the years, his passion for sharing the Gospel of Jesus Christ has made him to strive hard to reach out to millions of viewers. He is also the blogger and web interactive manager for an IPTV called “tipritv’ that reaches the diaspora Indians. He has two post graduate degrees – MA advanced in Homiletics from SAIACS, Bangalore and MA in Christian Studies from Madras University. His wife Christy did her MA Theology at SAIACS and is now teaching in couple of Bible colleges. They are blessed with two daughters Sharon and Ruth who are doing their schooling at Bangalore.