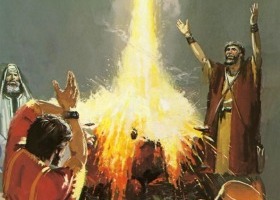 In Numbers 13 we find that the Israelites came to Kadesh Barnea at the border of Canaan – the land that God had promised them. It was now two years since they left Egypt (Deut.2:14), and God told them to go in and posses the land. The Israelites sent twelve spies to survey the land. All twelve of them came back saying that the land was indeed a wonderful land. Ten of them, however, said, “But there are huge giants there and we cannot conquer them.” But two of them – Caleb and Joshua – replied saying, “The Lord will help us to conquer those big giants.” But the 600,000 Israelites listened to the majority.

When ten leaders say one thing and two say the exact opposite, whose side will you take? God was on the side of the two here – Joshua and Caleb. Unbelief and Satan were on the side of the other ten. But the Israelites foolishly followed the majority – and that was why they had to wander in the wilderness for the next 38 years. They did not have the discernment to see whose side God was on! God and one person are always a majority – and that is where I want to stand always. We see in Exodus 32 that God was on the side of just one man, Moses, when all the Israelites were worshipping the golden calf. But of all the twelve tribes, only the tribe of Levi could see that then. And now when God was with Joshua and Caleb, even the tribe of Levi could not recognise it!

All of this has lessons for us today. Christendom in general is full of compromise and worldliness. Here and there, God raises up a few who stand for the truth of God’s word without any compromise. If you have discernment you will recognise that God is with those few, and you will stand with them against the majority. You will enter the promised land with them.

How do you identify the man with whom God is standing? He speaks the language of faith. Joshua and Caleb spoke the language of faith : “We can overcome.” We can overcome the giants of anger, sexual lust, jealousy, murmuring etc., We can overcome Satan. God will crush him under our feet. That is the language of the man with whom God stands. The man who is not with God says: “We must not take the Bible so literally. After all, we are only human. We will be defeated until the end of our lives. You have to understand human psychology.” I tell you, I couldn’t care less for all this human psychology. I believe God’s Word.

Many Christians go astray exactly like those Israelites – through human reasoning. God has hidden these things from the clever and the intelligent and revealed them to babes. If you use your human reasoning and your cleverness and your intelligence to study the Bible, I can guarantee that you will go astray. You need the revelation of the Holy Spirit. That’s why Jesus picked fishermen to be His disciples, and not professors like Gamaliel and his students. He did pick one of the students later – Paul. But the Lord had to take him into the desert for three years to bring all his pride to nothing before Paul could get revelation.